LVDT is an Electro-Mechanical Sensor.  Before getting into the topic we must not confuse with the following terms

Sensor: A device that converts a physical motion into an electrical output.

Actuator:  A device that converts an electrical signal into a physical output.

Transducer: A device that converts one form of energy into another

What is Rectilinear Motion? 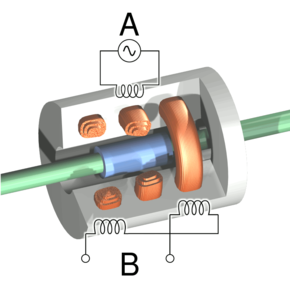 The Cylindrical ferromagnetic core is connected to the object which is needed to be measured or it can be connected to a plunger. There are three coils one is the primary coil and the other two are secondary coils.  An AC current is passed thru the primary coil. This cause the voltage difference(V0=V1-V2) in both secondary coils along the length of the cylindrical core.

This is how we will convert the physical motion into electrical signal/ electrical current/voltage.